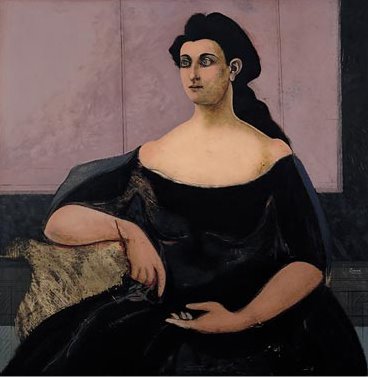 Allan Stone Gallery
The work of John Graham is not nearly as well-known as his protégés Arshille Gorky and Willem de Kooning. Yet Graham has achieved a place in the history of the New York School of painting. New Art City by Jed Perls is the most recent book to chronicle the influence of John Graham on the pioneers of the new abstraction.
John Graham is an acquired taste. His last eforts were devoted to a strange mix of classicism (inspired by Ingres), surrealism and the occult that precludes a wider acceptance by the genteel museum-goers who flock to the latest post-impressionist exhibit yet shy away from anything more difficult than late Monet. Second, there have been few opportunities to see any paintings by John Graham in the galleries and museums.
Thankfully, the Allan Stone Gallery exhibit may change some of this. Perhaps time has caught up with the mysterious and strange imagery of this enigmatic painter. Fans of Henry Darger may respond to John Graham. Note: the squeamish and conservative may be offended by the explicit imagery and implicit violence in the late works on view in this show.

“John Graham: Sum Qui Sum will be on view at the Allan Stone Gallery from October 22 – December 22, 2005. The most comprehensive John Graham show in almost two decades, this exhibition presents a survey of John Graham’s oeuvre, including his alchemy-inspired paintings and drawings, his majestic horses and soldiers, and his best-known work—the beautiful, elegant, and yet increasingly disturbing paintings of women.”

-from the press release of the Allan Stone Gallery
Posted by Al Doyle at 2:05 PM