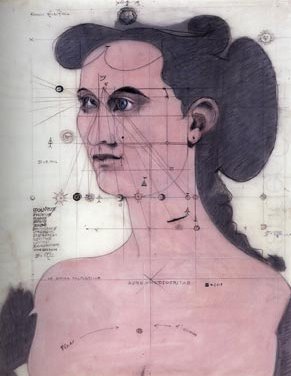 I visited the Allan Stone Gallery just the other day and was knocked back by the proximity of two unparalled masterpieces of American Art: Two Sisters (on loan from MoMA) and Marya (in the collection of Allan Stone and incidently, Not for Sale). This show is the show of the season: you would be hard pressed to see better painting on view in NYC at any gallery of contemporary art. Perhaps you could to go to the Fra Angelico show (currently at the Met) or even the Hans Memling exhibit (currently at the Frick) to see such sumptuous, intelligent and compelling images but no recent painting is equal to what Graham accomplished over fifty years ago. These paintings have gotten better with age, as we catch up them. These images look surprisingly at home to 21st century eyes accomstomed to Henry Darger(kindred spirit), John Currin (who wishes he could paint this well) and the current fascination with the self-mutilation of performance artist Maria Abramovic.

I had been looking forward to seeing this latest show of Graham's work, the largest exhibit in New York in two decades; lingering impressions of that earlier exhibit still haunt my soul. The sheer force of these paintings which burst forth from under the shadow of Picasso and greatly influenced both Gorky and de Kooning impressed me with their virtuosity and utter weirdness. This show is not to be missed.


This from Jed Perl on John Graham:

"Esoteric forms of knowledge have had a special appeal for modern artists because they could provide a mystery or complexity that was otherwise missing in twentieth-century life, and these esoteric forms of knowledge were most often appealing when they were hyper-personalized, presented obsessively, paradoxically, so that esotericism became an especially stylized kind of individualism. Harry Smith’s Heaven and Earth magic has this quality;…so do the paintings of cross-eyed dames decorated with geometric emblems that John Graham, that old friend of de Kooning’s, was exhibiting in the 1950’s. looking at Graham’s paintings and drawings, you do not really know why there is a model of a dodecahedron placed right next to a particular woman, or why another woman’s face is covered with a grid of images of suns and moons. And yet this seems to be the way it has to be for Graham, and you may feel that this is the only explanation that is needed."

Bloggasm #7
Sam Sugar Saturday 5th November, 05 The best of the blogs by the bloggers who blog them: Tags: bloggasm No comments yet... Leave a comment
http://www.massachusettsinjurylawyers.com

Dawn Eden's Blog On: Slam-dunk on the Net
ATTENTION BLOGGERS: If you would like to include "Blog On!" in your blogroll, use this permanent link , which updates with a new column every Sunday.
Want coloring hair related information?