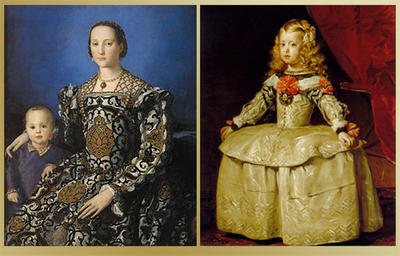 From the classic Principles of Art History(the problem of the development of style in later art) comes this comparison of two modes of seeing and consequently two modes of painting: linear (Bronzino) and Painterly (Velazquez).


In the words of Heinrich Wölfflin:
Bronzino

“is particularly interesting as the presentment of a sumptuous costume perceived by an exclusively linear taste. No human eye can see things in this way—I mean with this even firmness of line. Not for a moment does the artist depart from the absolute distinctness of the object, it is as if, in the representation of a bookcase, an artist were to attempt to paint book by book, each equally outlined, while an eye attuned to appearance only grasps the shimmer playing over the whole in which, in varying degrees, the separate form is submerged. Velasquez had an eye thus attuned to appearance. The dress of his little princess was embroidered in zigzag patterns: what he gives, however, is not the ornamentation in itself, but the shimmering image of the whole. Seen uniformly form a distance, the patterns have lost their distinctness, yet without looking indistinct; we can see perfectly clearly what is meant, but the forms cannot be grasped, they come and go, the highlights of the fabric play over them, and the whole is dominated by the rhythm of the light-waves … which also fills the background.