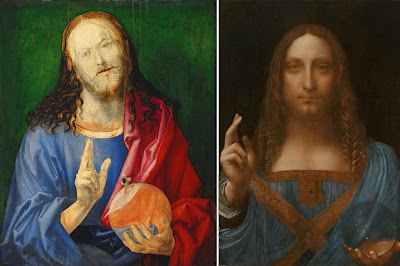 The image on the right Salvator Mundi c. 1500 was just confirmed as an authentic Leonado da Vinci original painting of Christ as Savior of the World. The image on the left is an unfinished painting with the same title and subject by Leonardo's contemporary, Albrecht Durer from the collection of the Metropolitan Museum in New York City.

I include both images here as an interesting art history compare/contrast exercise: is it possible the Durer was aware of the da Vinci painting and this is his reaction to the Florentine master's work? I'd like to think so.

For more information on each painting see the links below:
Da Vinci Discovered: Painting Gains Attribution After Careful Scholarship and Conservation
http://www.artdaily.org/index.asp?int_sec=2∫_new=48949

"A lost painting by Leonardo da Vinci has been identified in an American collection and will be exhibited for the first time this November. Titled Salvator Mundi (Savior of the World) and dating around 1500, the newly discovered masterpiece depicts a half-length figure of Christ facing frontally, holding a crystal orb in his left hand as he raises his right in blessing."

"Devotional images of Christ as Salvator Mundi, or Savior of the World, were especially popular in Northern Europe. Christ raises his right hand in blessing and in his left holds an orb representing the earth. Dürer probably began this painting shortly before he departed for Italy in 1505, but completed only the drapery. His meticulous preparatory drawing on the panel is visible in the unfinished portions of Christ's face and hands."

This is a newfound copy of Mona Lisa found in Spain (thought to be painted by a contemporary along side the original.
They say he made two trips to visit Davinci..

The Dürer painting looks like the face has been repainted, likely by a different and less skilled artist, some time later. Alternatively, it's just an unfinished painting. Can't really tell for sure which without looking at the real painting. Anyway, not his best work :P (The daVinci, if it is really a daVinci, is terrific! I know the article says it's verified after careful study and all, but it just looks too well preserved to me.)

The Dürer painting is clearly unfinished, I've seen it often at the Metropolitan Museum in NYC as Chris states. I also agree that the da Vinci looks remarkably preserved and has an over delineated contour profile uncharacteristic of his paintings.